After our journey back to Guwahati, we left for Arunachal Pradesh via Bhairav Kund (situated on the border of Bhutan and Arunachal Pradesh, near the Bhutanese town of Daifam). As the relationship between India and Bhutan is great, it's fairly easy to get into Bhutan with a pass. As we had a lot of distance to cover (Guwahati to Dirang which is over 300km, because of the terrain takes more than 8-10 hours), we decided not to go into Bhutan even if for a few hours.
Arunachal Pradesh
Arunachal Pradesh is the easternmost state of the country and shares international borders with China, Myanmar, and Bhutan. It stretches from snow-capped mountains in the north to the plains of Brahmaputra valley in the south and is home to some of the Himalayas’ tallest mountains. 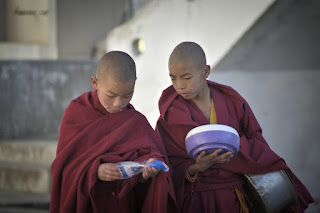 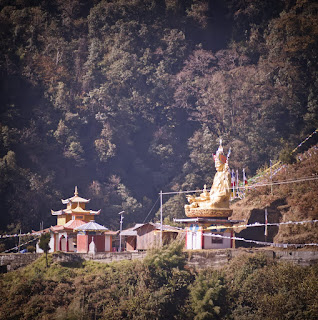 It is a land of lush green forests, deep river valleys, and beautiful plateaus. It is also one of the coldest regions in India. The region has a large Buddhist population and many monasteries, which are known for their hand-carved wooden sculptures.
The main places of interest for us would be Dirang, Bomdila, Tawang but because of the large distances and the treacherous terrain, a lot of time will go into traveling. Border Road Organization has done an excellent job in building the roads to near perfection. This is also to do with the sensitivity of the region as it shares borders with one of the most covetous, expansionist countries in the world. Once you make inroads into Arunachal, you can see army camps almost everywhere unsurprisingly.
Dirang is a pit stop for vehicles coming from Guwahati as travelling to Tawang from Guwahati in a day is quite a task because of the terrain and altitude. Dirang is a quiet little town with monasteries and Kameng river - a nice place for an overnight stay.

After the overnight stay in Dirang, the next morning journey is towards Tawang. On the way, we'll find many memorials, army camps, waterfalls making the journey exciting. 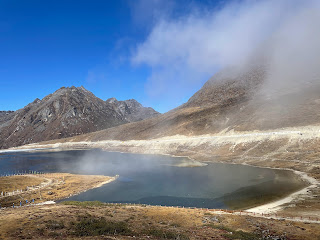 When we reached Tawang on Dec 9, the omens were not good - we heard there was some meeting between Indian and Chinese army personnel, and all the tourists were asked to go back (from Bum-la, the line of actual control between India and China). This was bad news for us as we were scheduled to go to Bum-la the next day. As luck would have it and as the Gods may have willed, there was no problem for us to go to Bum-la the next day.
Tawang is the last town of India, located close to the India-China border. It's a splendid place, filled with snow-capped mountains and deep valleys. It's also home to one of the biggest presences of the Indian army, which guards the border and keeps the town safe from any intruders. Being the last town in India means you can get a glimpse of the Chinese border without actually crossing it - it happens in Bum-La! It's a great spot for adventurers, as there's plenty of hiking, camping, and wildlife watching to be done. Plus, the scenery is simply breathtaking. 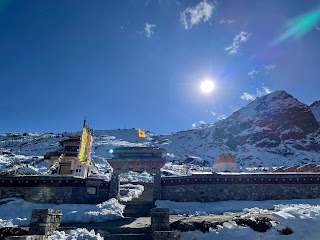 The drive from Tawang to Bumla is one to remember. If you're looking for a truly adventurous drive, look no further than the drive from Tawang to Bumla. This rugged terrain is a challenge to even the most experienced drivers, but if you're up for it, the views are worth it. The winding roads snake through a beautiful valley and offer spectacular views of the Himalayas. But be warned - the terrain is rocky and the roads can be treacherous, with hairpin bends and sheer drops! You'll have to be extra careful, but the feeling of conquering this terrain will make it all worth it. Plus, there are plenty of stops along the way for you to take pictures and marvel at the stunning landscape.
Needless to say, the drive back from Guwahati is equally breathtaking. Arunachal, as mentioned before is home to monasteries and you will find them in all the towns: Dirang, Tawang, Bomdila etc., If you are a military history enthusiast, you'll love the whole circuit as each town speaks to you (Brig. Dalvi's book "Himalayan Blunder" is highly recommended in this context). 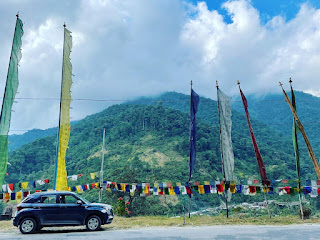 In conclusion
Northeast is an unsullied beauty - it has something to offer to everyone: adventure seekers, nature and peace lovers, history buffs, spiritual enthusiasts, etc. If given proper focus and publicity, it has all the potential to be developed as a major tourist destination of the world. All Indians should endeavor to travel to the Northeast, soak in the beauty and be amazed at how diverse a country India is and know it first-hand.
Posted by Dhruva at 9:21 PM No comments:

India is the land of the Himalayas, the country of spirituality, and the place where four of the world's major religions were born. It is also a country that has a lot to offer in terms of nature and culture, that can be rivaled by few other countries in the world.

The North-east region of India is unique in many senses: not as crowded as other parts of India, largely unexplored barring a few places, and one of the most off-beaten destinations. The region offers pristine views and some of the most beautiful landscapes in India- from lush green tea plantations to snow-capped foothills of the mighty Himalayas. And of course, the never-ending streams and falls.

Four of us - ex-colleagues turned friends decided we'll go someplace in the East this winter. Bhutan and Arunachal Pradesh were the two contenders, Arunachal won for budget reasons (we learned Bhutan has turned very pricey for foreign tourists, especially after Covid). One of our friends in the group is from Guwahati. He suggested that there is this "Hornbill festival" that happens in Nagaland from Dec 1 to 10 every year - we can witness that too if the time matches. This (Nagaland, Guwahati, Arunachal) formed the skeleton of the trip in which Arunachal was the core.

I'll briefly highlight the important places covered on the trip.

The Kaziranga National Park is one of the most well-known destinations in Assam. The park is home to two-thirds of the world’s population of one-horned rhinoceros. We took both an elephant safari (highly recommended) and a jeep safari. Rhino sights are common along with elephants, wild buffalos, deer, etc. The national park also houses 100 odd tigers - of course, their sightings are quite rare.
Assam, along with a few other states in the East is a diverse and culturally rich state - with close to one hundred distinct tribes (Bodo, Kachari, Rabha, Lalung, Karbi and Garo to name a few), foods, dresses, etc. The cultural show that gets organized in the orchid park showcases all the varieties of dance, and music forms of Assam. The orchid park also showcases the varieties of the flora of the state.

The Kamakhya temple is located in the heart of the city and is dedicated to Goddess Kamakhya. It is one of the 51 Shakti Peeta spread across the sub-continent, which are shrines that represent the goddess’s body parts. The temple has been an important pilgrimage site for centuries and is visited by both Hindus and Buddhists alike. 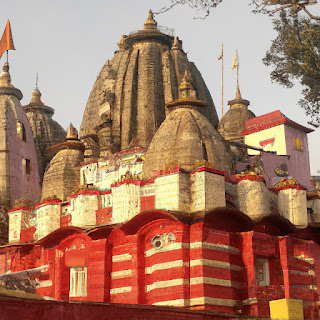 It's one of the few prominent temples where tantric practices are carried on to date. It was a different kind of experience for most of us as this was unlike most of the temples we had been to.

Nagaland is a very small state in the northeast, and it is also one of the most exotic places in India. The people are mostly tribal, and the Christian missionaries have converted them a century ago to Christianity, and the vast majority practice Baptism. English is the official language.

Apart from the natural beauty, Nagaland is also known for its tribal festival called Hornbill Festival which takes place every year from December 1 to 10 in the capital city of Kohima is an annual festival that celebrates the culture, tradition, and history of Nagaland. The festival lasts for ten days, and it includes different events such as arts, crafts, music, sports competitions, etc., which showcase the colorful traditions of Nagaland to outsiders too. 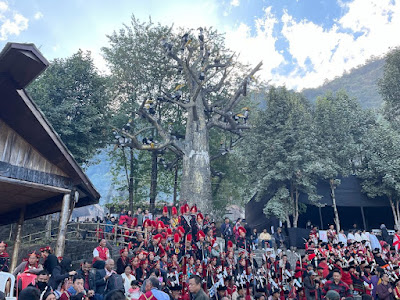 You will have a tough time if you are a vegetarian as the options are very scarce (even for non-vegetarians the options are mostly to do with pork, chicken, and beef). Since we had only a night and two days scheduled for Nagaland, we couldn't cover other places of interest like Dzüko Valley which would be a great place to visit if you have one day extra. Entering Nagaland requires an inter-state permit which is to be taken beforehand. This is the same case with Arunachal Pradesh too.
The other places of interest in Kohima were the war cemetery (a memorial dedicated to the 2nd British Division of the Allied Forces who died in the Second World War at Kohima) and the cathedral of Kohima which we visited on our way back to Guwahati. We needed a break before our much-awaited sojourn to Arunachal Pradesh (we'll cover this in the next and final part).
Posted by Dhruva at 1:41 PM No comments:

I started blogging in 2010 - which is just about a decade ago. When I started, I did not have anything specific in mind - I just liked writing. The name was different at the beginning (not Theme India), which I don't remember. But as it evolved, I observed most of the posts had one common theme - India. Hence the name.

There are some digressions of late - there were posts that were just monologues, some of them sort of you could find in personal diaries, some travelogues, things like that. I thought it was important to have one more medium - one dedicated to India-centric topics and the other for the rest.

Blogging has been a great journey so far. Thanks for all the encouragement, kind words of support in all these years. This space will remain and continue. Thank you.

Posted by Dhruva at 7:02 PM No comments:

Dhruva
Testing and exploring my boundaries of ignorance